Your bears are all very charming.  They look professional.  Their bodies and limbs are straight, their faces are even and the fur lays in the correct directions. I would say go for it.  Who knows what collector will see them and fall in love???  Good luck!

What a wonderful cub!  You have outdone yourself, Francy!!!!

The are so sweet!

What a cutie!  Great face and I love the fur!

Thank you so much, Pink!  He was a joy to make!  maybe there will be brothers and/or sisters!

Such a lovely face Carrie!  My mom had one and she looked just like this.  Her name was Lacy.  Thanks for the great memory!

Little Amy was creeping back up the stairs as quietly as she could.  If Momma caught her sneaking into the attic again, she would be in so much trouble!  It was only yesterday that the lure of so many curious treasures had made her ignore her mothers’ warning that the attic was dangerous and off limits.  But just as Momma was taking her back down the stairs, Amy had caught a brief glimpse of what appeared to be a teddy peeking out of the shadows from behind a stack of old books.  Spurred by heartbreak at the loss of her long time teddy friend, Mr. Fluffwilly, when they moved to the old family house, she just had to come back to investigate!  Amy was so afraid as her heart beat loudly enough that she was sure it could be heard.  The attic door groaned in protest as she pushed it open and every floor board found its voice as she slowly tip toed across to where she had seen him.  She held her breath and stretched up as tall as she could to reach behind the books.  Oh my, there he was!  As Amy lifted him from his hiding place, she immediately knew his familiar face.  She had seen his picture only this morning on the fireplace mantle tucked caringly under a little girl’s arm.  The little girl was her Grandmother and he was her Grandma’s Bear.  His fur was a little matted, his nose a little frayed and his joints were a little loose but there was so much sincerity in his face and his eyes were as bright as ever!  She was never going to let him go.  She was, however, going to have a hard time explaining him to Momma!

He is 12" tall and available on my website.  Thanks for looking! 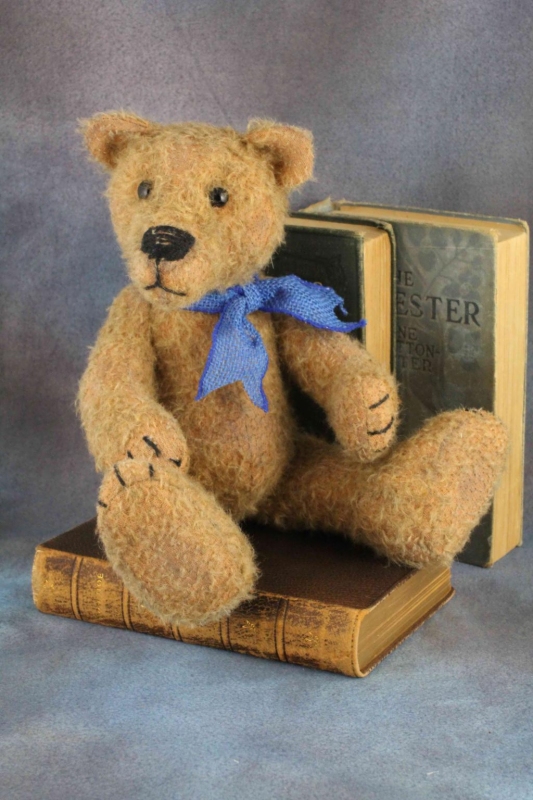 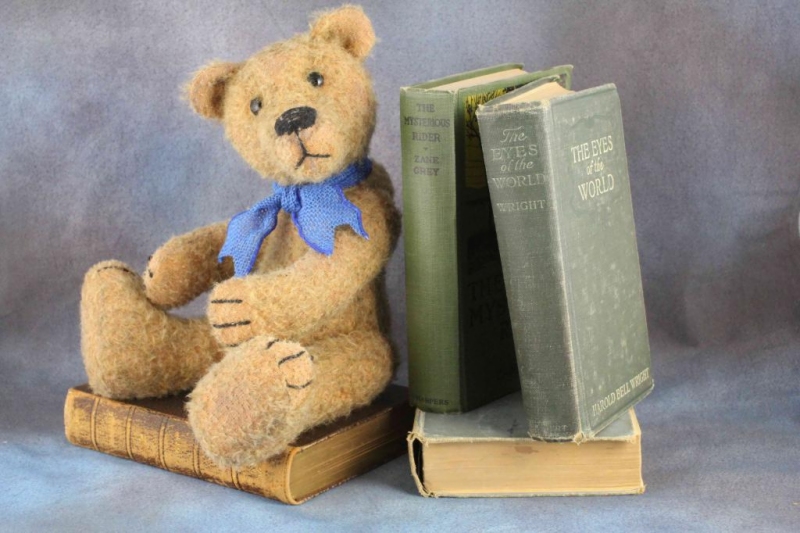 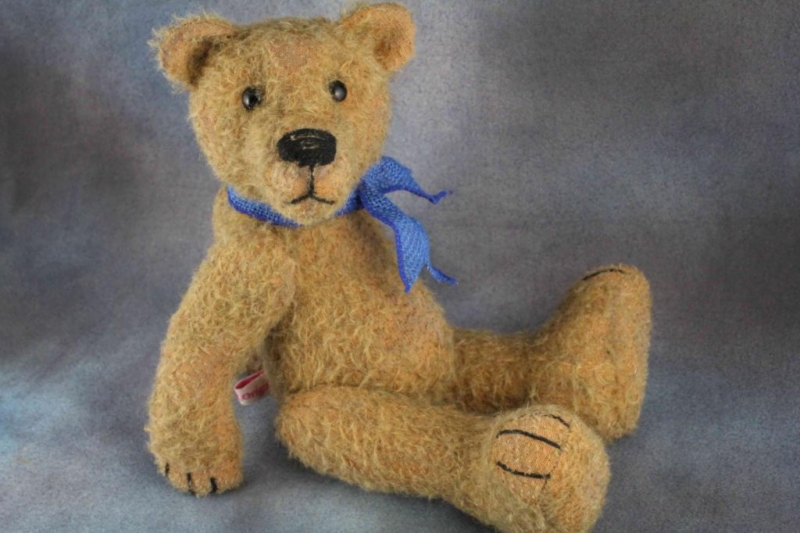 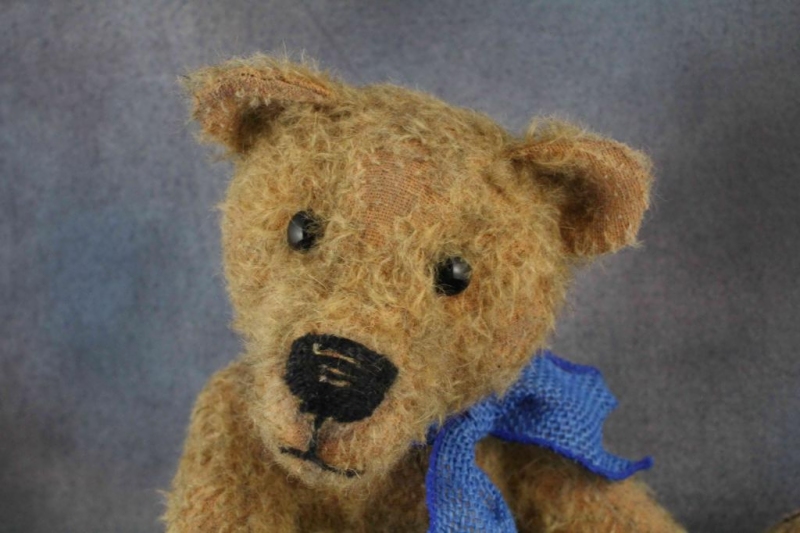 He is so cute, how could anyone forget him even for a little while!  Here are some hugs for him

He is soooooo cute!

What a great panda with a great story!

Thank you so much Pink and Kornelia!  Mattie is willing to go shopping with you any time, but I must say, I'm not sure she'll be quite as frugal spending someone else's money as she is with hers.  Just saying!

Thank you so much, Michelle!  Who doesn't like shopping????  I was trying to find a good blue for her paws and couldn't.  Then I noticed the fabric next to my jeans and thought that's it! I also bought 4 or 5 different skeins of blue pearl cotton before I got the right color!

Please meet Matilda (she prefers Mattie).  Mattie loves to shop. You will find her most afternoons in her favorite stores at the huge shopping mall near her house.  There is no internet shopping for this little girl!  She likes to meet and greet all the people in the shops, touch all of the wonderful things to buy and most of all, try on the clothes.  Her favorite time of the year is fast approaching; fall and all the holiday shopping!  She always dresses with care for her shopping trip in a light fashionable dress and hat with a shawl for her shoulders if the stores are too cool and she takes her own favorite shopping bag. Mattie wants everybody to know, however, that she is not a frivolous shopper!  She always shops within a budget and follows it to the penny, because she knows if she spends too much in one trip, there won’t be any others; “Lots of looking, little buying” is her motto.  But if that one starts to waiver, she backs it up with “Save a little for a rainy (shopping) day!” 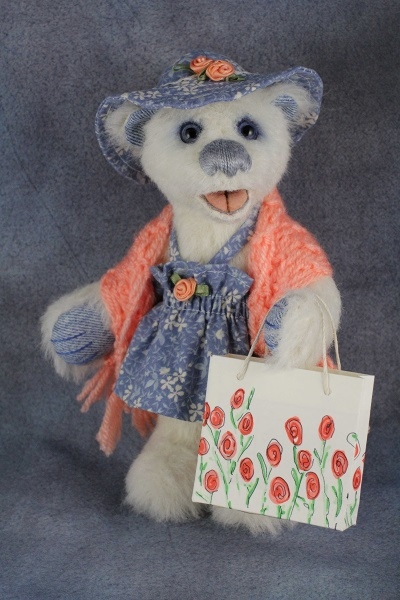 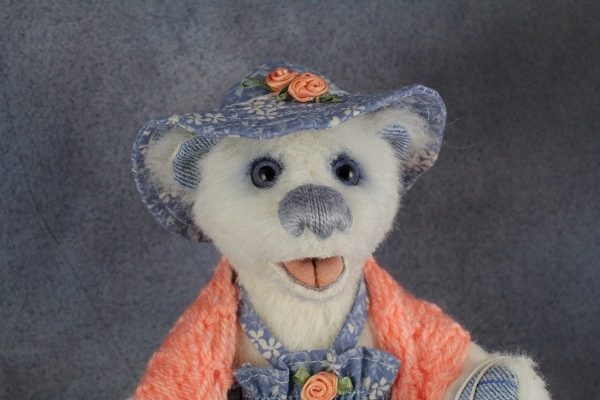 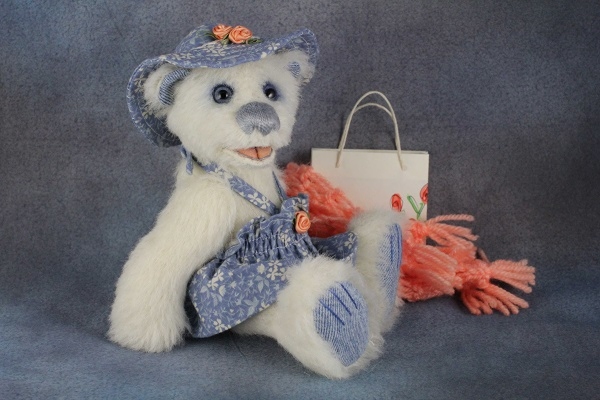 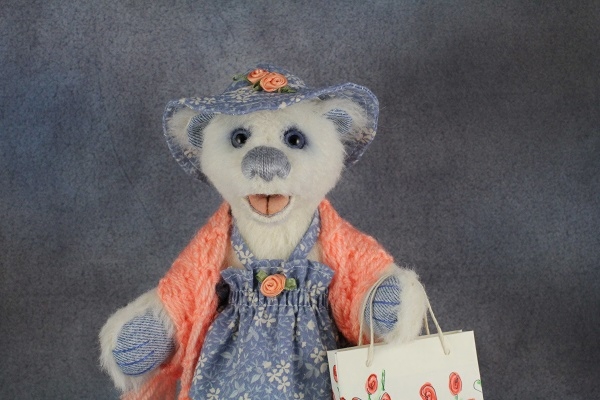 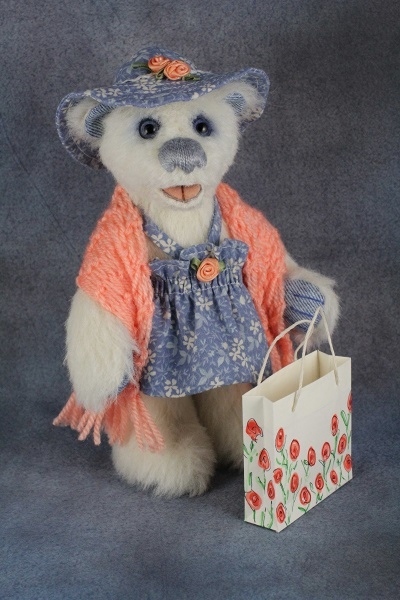 Very lifelike!  He is beautiful!

What a great sheepdog!